When Margaret Evans’ musically-gifted daughter Laura is awarded a scholarship to a prestigious university, it seems like a dream come true. But when Laura falls in love at school – with a girl – that dream is threatened. Inspired by historical events, Sonata 1962 is a heartbreakingly beautiful chamber musical about the length to which a mother will go to save her daughter in a time when same-sex desire was viewed as both criminal and curable.
New York Theater | NYMF Review Sonata 1962: A Lesbian Daughter, A Mother’s Mistake
by Jonathan Mandell | August 5, 2018
"Margaret, a widow and well-meaning mother, is dressed in pearls while making her special buttermilk biscuits for her daughter Laura, who’s back home listless with severe memory loss after her mother sent her away to be tortured. That of course is not how Margaret sees it in “Sonata 1962,” one of the last of the shows in the 15th annual New York Musical Festival. Written by Patricia Loughrey and Thomas Hodges, the musical takes us back to an era when suburban housewives baked with Crisco, watched Jackie Kennedy give a White House tour on a black and white set, shopped at the Green Stamp store in town, and believed the family doctor that their daughter’s lesbianism was a mental illness, but one that could be cured.
... In one of the first songs of the show, “Making The Day,” when Margaret is baking those biscuits, she sings a punchy musical phrase “Got my mixer, my flour, my timer, my powder, my Crisco, my milk and my salt.” Along with the more explicit refrain in that song – “Follow the recipe/Nothing can ever go wrong” — this drives home the point of “Sonata 1962,” presented with compassion. It’s comforting to “follow the recipe,” and hard to accept that life itself doesn’t have one."
Interested in producing this show? Contact us below for the script, score and demos.

The Daddy Machine, a musical commissioned by Diversionary Theatre, and created by award-winning playwright Patricia Loughrey and off-off-Broadway composer Rayme Sciaroni, is based on the children’s story for gay and lesbian families written by Johnny Valentine. The show honors and celebrates both that which is unique and that which is universal in the lives of LGBT families. The musical, featuring two moms, two kids, a dog named Stonewall and sixty-two dads, premiered at Diversionary Theatre on January 18, 2008. ​ 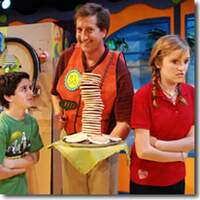 Pancake dad.
​Two moms, two kids, one singing dog, and 62 dads: a musical for gay and lesbian families!!! Summer vacation can’t get any better… until Mama breaks a filling and Mom drives her to the dentist. Sue is left to baby-sit while Harry pitches a tantrum, demanding the promised pancake breakfast. While the kids argue about which of their friends has the most useful parental configuration (three dads and two moms, two dads, none of either…) Harry noodles with spare parts and a large cardboard box. Suddenly, the box starts to shake and out steps a dad, complete with a plate of pancakes! Before Stonewall can howl for help, sixty-two dads fill the house with pancakes and chaos. Will Sue find a math formula to solve this dilemma? Will Harry ever get a pancake that doesn’t taste like cardboard? Will Mama’s Novocain wear off in time for her to stop Mom from buying a whole new kitchen at Home Depot? And how do you stop a daddy machine that doesn’t have an “off” switch? In the end, the kids realize that the best parent of all is the one who knows you and loves you, even when you’re hiding sixty-two dads... 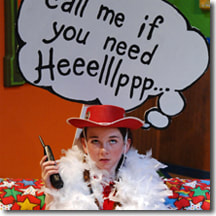 Critics raved about the Daddy Machine!

"Diversionary Theatre has always embraced risk. Still, producing a world-premiere kid-friendly musical seems like a high-wire walk over Niagara Falls for the theater, which presents often-edgy plays with gay, lesbian, bisexual and transgender
themes. Diversionary took additional chances assembling a homegrown creative team. Patricia Loughrey, an award-winner author of educational plays, was new to musical theater and had never worked with composer Rayme Sciaroni. And the show they wrote, “The Daddy Machine,” about the children of a lesbian couple who make a machine that produces fathers, required child performers who could not only act but carry solo songs. That alone could have been a recipe for disaster.
'The Daddy Machine' premiered on Saturday, and Diversionary's sparkling high-wire act rivals the Flying Wallendas. In Loughrey's clever script, a lot of the humor stays broad enough for children (for instance, a slapstick bit where four of the dads run wild in wacky costumes) but there are also witty references to crack up adults. Sciaroni's bouncy tunes and nimble lyrics got this mature viewer happily joining the kids in sing-alongs. Only one song, “A Little Blessing,” strayed into treacle. Well-paced direction by Sciaroni and Siobhan Sullivan kept young viewers from squirming during the hour-long show. The kids even get a chance to come onstage, don silly hats and emerge through the “daddy machine” (an appliance box).Loughrey adapted “The Daddy Machine” from a picture book of the same name by Johnny Valentine and added the inspired touch of the family dog, Stonewall, an actor in a floppy-eared cap with a “tail” sticking out behind, who acts as a sort of emcee. Played with engaging goofiness and a pleasing voice by Jacob Caltrider – in what the program describes, remarkably, as his first paid acting job – Stonewall sets up the spirit of fun with an opening song expressing his delight in his squeaky toys and family of “two kids and me, two moms and a couch. . . . It's all good.”
The children are brainy 13-year-old Sue and impulsive 8-year-old Harry, whose lust for pancakes is thwarted when one mom loses a filling and the other rushes her to the dentist. Dads make pancakes, Harry declares in wistful song – “one dad, one boy and a stack of pancakes, a perfect team.” Meanwhile, Sue is googling “fathers,” and suddenly Dad No. 1 (Andy Collins) steps out of the appliance box bearing a spatula and a foot-high stack of pancakes. Dad No. 2 (Sven Salumaa) soon follows, and the “Daddy Machine” keeps spitting them out, with four actors and the briefly appearing audience recruits. Sue ultimately laments being in “a household full of jocks” in the song “Sixty-Two Dads.”
On Saturday, Lirenza Gillette and Max Oilman-Williams played Sue and Harry (they alternate with Haley Heidemann and Benjamin Shaffer), and they're both troupers. Gillette brought deadpan hilarity to “Sixty-Two Dads,” wearing a white boa and red cowboy hat, her clear voice unfaltering as a playful dad dangled her upside-down. Susan Hammons and Krista Page take dual roles as the moms and Dads No. 3 and No. 4, joining Collins and Salumaa in a doo-wop paean to “The Art of Making Pancakes,” the lyrics tickling young viewers with threats to add special ingredients like liverwurst and anchovies.
Production details show impeccable care. Costumer Shelly Williams must have had a blast creating the dads' silly dress-up duds, and scenic designer Christian Lopez fills the family living room with a kid-appealing palette of orange, green and purple and accents of polka dots; a “wall” to one side disguises the back of accompanist Tim McKnight's piano. Along with performances at San Diego State University and Cal State Long Beach, “The Daddy Machine” has been booked for R Family Vacations' March cruise. (The company, co-directed by Rosie O'Donnell's partner, Kelli O'Donnell, focuses on gay and lesbian travelers and their families.) Those engagements promise to be the start of a long life beyond San Diego for a show that does just about everything right. - Janice Steinberg, San Diego Union-Tribune

"Diversionary Theatre’s world-premiere The Daddy Machine is critic-proof, which is to say it’s one of those shows you like regardless. It’s a fantastical, family-friendly musical skit more than it is a play, centering on a same-sex household, a singing dog and 62 dads (some of whom are recruited from the audience) who pop out of an otherworldly contraption and make life interesting for Harry and Sue (Max Oilman-Williams and Lirenza Gillette), the two kids. The point of this Patricia Loughrey libretto is that the parents’ gender takes a back seat to the love and stability they create in the home—as Sue puts it, 'A dad is a just a mom who’s a man.' The Daddy Machine underscores that little gem with gentility and fun." - Martin Jones Westlin, San Diego CityBeat Listings

“… the fantasy and joy of 'Daddy Machine' is pure, overt and involving”. "This production is highly recommended for all audiences and contains not one moment of preaching about the acceptance of, and the exceptional parents found in, households maintained by same-sex partners. Joy is infectious…" - La Jolla Village News, Charlene Baldridge

“… Stonewall absolutely captivates the kids” " The star of the show is Stonewall (Jacob Caltrider), the family dog. As with any dog, the world revolves around him, his toys, and the number of pats on the head he gets from the family." - Robert Hitchcox, News Blaze 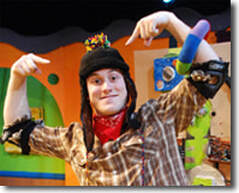 Stonewall the singing dog.
What did audiences have to say?

“My kids were riveted. I haven't seen anything hold their attention like this, not even cartoons. My two-year-old never squirmed once during the entire show!” - Audience member, R Family Vacation cruise to Mexico

“This is maybe the most fun I've had in a theater ever. I left feeling so good, and my kids are still slinging “Our House.” They listen to the CD in the morning when we’re eating breakfast.” - Audience member, San Diego

“I was really moved. It was so nice to see that family. I think I'm going to start talking to my partner again about us possibly adopting.” - Audience member, San Diego State University