"If the government is ever going to be returned to the people, it will only be returned when the people demand it. When the people throw off the political machines, the public relations speeches, and the crumbs thrown to keep you quiet…" - Harvey Milk 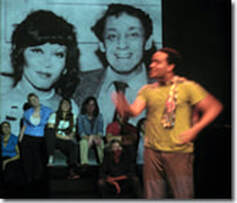 "I've seen thousands of NYC stage productions. None has radiated more love than this one." - Hy Bender on Fringe, NYC

"This theatrical event, playing at the SoHo Playhouse, is something entirely new: a riveting, emotional exploration of the life and lasting impact of Milk through music, photographs, Milk's own words, and reflections from those who knew him." - Theatre Mania, NYC

"…it was one of his innermost values, - that you just don't diminish people." - Stuart Milk, Gay Rights Activist and Nephew of Harvey Milk

"Harvey Milk was a great gay visionary whose politics extended way beyond the gay community. He was progressive, he was daring, he was unapologetic, he was forceful and he was right, most of the time." - Robin Tyler, Plaintiff in the California Supreme Court Lawsuit, Tyler v. County of LA – the Same-Sex Marriage Case

"You can be this totally ordinary person with this really fucked up life but if you have courage and speak the truth and are willing to stick it out, it's amazing what you can do." - Cleve Jones, Creator of the AIDS Quilt

"For a tribute to Harvey Milk, Patricia Loughrey interviewed "the people he knew and the lives he changed." At Diversionary Theatre, a cast of seven reads/performs letters, interviews, and testimonials while Thomas Hodges plays original music on piano and slides project on a scrim. What comes through is a courageous man, savvy in politics, with a remarkable gift for seeing the potential in people - like Anne Kronenberg, whom he made his campaign manager when she was an inexperienced 22.

The movie Milk has been criticized for hagiography (as if he were the first gay person to run for office and the first to shout "come out!"). Loughrey's script verges at times on gilding but succeeds in painting a balanced portrait (as when Ammiano says, "He was a mensch in many ways - and a diva"). What also comes through are touches missing from the movie (for me, at least, Sean Penn stood between Milk and the audience, his performance calling as much attention to himself as to Milk). Dear Harvey offers more personal observations and recollections - the off-camera Harvey Milk, in other words, who, the 55-minute Diversionary piece shows, was quite a human being.

… Got Milk? This may just be Harvey’s year. On the heels of the Oscar-winning film, “Milk,” in the 30th year after his assassination, there’s a state bill, SB 572, being sent to the Governor, to make May 22, Harvey’s birthday, Harvey Milk Day in California. At the same time, Diversionary Theatre commissioned its own tribute to the civil rights activist. “Dear Harvey,” a world premiere conceived long before the film was released, honors the impassioned, inspirational visionary, the first openly gay elected official in California, who championed all human rights. On November 27, 1978, ten months after he was elected to the San Francisco Board of Supervisors, Milk, 48, and Mayor George Moscone, 49, were gunned down by conservative city supervisor Dan White. White got off lightly on the “Twinkie Defense,” served five years in prison and killed himself shortly after his release.

“Dear Harvey” was based on local playwright Patricia Loughrey’s interviews with those who knew Milk, from politicos and activists to local politicians Toni Atkins and Christine Kehoe. Interspersed with the touching letters, testimonials and remembrances are historical/archival materials, including Harvey’s own speeches and photos by San Francisco LGBT photographer Daniel Nicoletta, whose character featured prominently in the film. San Diego playwright /actor/musician/composer Thomas Hodges created music for the production, which he played live on a piano at each performance. Nimbly directed by Diversionary’s executive/artistic director, Dan Kirsch, the first-rate cast - John Garcia, Tony Houck, Aaron Marcotte, Jerusha Matsen Neal, Carla Nell, Kim Strassburger and Scott Striegel - persuasively represented a range of people and voices.

It all added up to an inspiring, edifying, enlightening and sometimes amusing evening, one that really should have a future, which has already begun." - Pat Launer: Spotlight on Theater, sdnn.com

"...In the 30 years since his death, Milk has become an icon for gay rights. Now adding to the iconography of Milk as human
rights activist is a world premiere play commissioned by Diversionary Theatre. Part tribute and part documentary, “Dear Harvey”
is based on interviews with politicians, fellow activists, friends and nephew Stuart Milk. Playwright Patricia Loughrey also
includes Milk’s own words from speeches, official statements, personal letters and a column he wrote for the Bay Area Reporter.

Through these various sources emerges a touching, life-affirming and at times humorous portrait of the activist who affected so many and changed the course of politics. Milk fought not only for gays and lesbians, but for minorities, the elderly, unions, public transit, health care, and even dope smokers and prostitutes. He believed in individual freedoms, the power of community and the importance of gays to come out of the closet, to be seen and heard.

Loughrey incorporates many local voices – including politicians Toni Atkins and Christine Kehoe, and activists from local chapters of Old Lesbians Organizing for Change and the National Organization for Women – that provide a sense of what the movement was like in San Diego. In one particularly funny story, a woman recounts how local NOW members dressed conservatively and set up tables at local supermarkets with signs that read, “Meet your local lesbian,” in a bid to demonstrate that gays and lesbians were neither intimidating nor freakish.

There are coming out stories. Memories of meeting Milk for the first time. Cleve Jones’ recollections of starting the AIDS Memorial Quilt project. Thoughts on the riots that followed the sentencing of Dan White – who received just seven years for the murders of Milk and Mayor George Moscone.

No single member of the ensemble plays Milk; instead, each plays a number of different “characters,” giving them distinct voices and mannerisms. Director Dan Kirsch does a fine job of layering the voices, sometimes in lyrical fashion, other times evoking an angry mob or a throng of fans. One of the most touching moments in the play comes when we are introduced to composer Thomas Hodges, who provides the lovely and perfectly fitting piano music that underscores the play. A 20-year-old student at San Diego State University, Hodges comes out from behind the piano to take the stage, reading his own “Dear Harvey” letter of gratitude and inspiration.

The play is not only the story of Milk, but of his legacy, and the changes that have happened since his assassination that acknowledge his death wasn’t in vain. It’s an important piece of history, an inspirational story and engaging theater."  - Jennifer Chung Klam , San Diego Arts

​Commissioned and produced by the Food Bank of Contra Costa and Solana, tours annually.

A View of the Truth from a Windowless Room